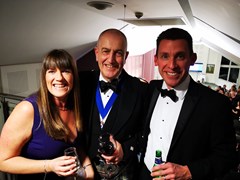 A fantastic time was had by all at the Exeter Institute’s 98th Annual Dinner, which took place at the County Cricket Club in Taunton on the 6th March 2020.

The dinner which celebrates professionalism and member achievement looked back on the past year with speeches from Phil Wilson current Exeter Institute President and Grant Scott CII Vice President of Local Institutes.

The Young Professional of the Year David Grimley award was collected by Christopher Samuels of the Exeter, It was first presented in 2006 in remembrance of the late Claims Manager of St Paul Travelers - David Grimley. The prestigious David Grimley Award recognises professional development and achievements of young people across Exeter, Taunton, Torquay and North Devon generously sponsored by DWF www.DWF.law

and congratulations also go to Tia Morrison on receiving the Porter Prize which recognises hard work and outstanding results by a young person and is sponsored by Sylvia Jane, Education Secretary of the Exeter Institute Council, in memory of Leslie Porter, her father who was formerly of Prudential Assurance

Thank you to all those that attended to support the institute and our chosen charity Saint Margaret’s Hospice, together we raised over two thousand pounds.