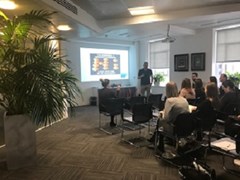 Paul discussed the statistics for 2019. Ladies, you won’t be surprised to hear that we still give an improving picture and younger people are still involved in the most accidents. Paul illustrated the statistics with a very colourful graph. Interestingly 24% of accidents happened on the way home from work, 23% of accidents related to motor cyclists and 15% of the accidents related to senior citizens. Encouragingly, there was a 10% drop in accidents in 2018 and a further 10% drop in 2019, but the most dangerous place to be is a pedestrian. Merseyside’s target is to reduce the accident statistics for pedestrians to below 400.The room were tested on their knowledge of drink drive limits with very mixed results. Most knew that drink drive limits depended on the weight of an individual, but not the circumstances affecting the individual at the time. School parking, Paul said is still a massive problem in Merseyside. The most causes of casualties were speed, distraction, phones, technology and passengers as well as driving too close and fatigue. Fatigue, Paul added was more dangerous than drink driving or driving under the influence of drugs.For young drivers – the Engage scheme is being used by schools. Twenty-five highly skilled driving instructors work together with the police to help young drivers to improve their driving skills. They also learn additional skills such as refuelling and maintenance, driving in weather conditions, stress and distractions, drink and drugs, and driving laws.Young driver’s perceptions were interesting. The DVLA said that a driver would need 40 lessons to pass and be able to drive competently. Young drivers thought that 10 lessons would be sufficient. Perhaps the young driver’s youthful enthusiasm could be a factor with this perception or at £25 per lesson there is a big difference in cost. Also, accident statistics are improving, the same can’t be said for speeding offences. There were 96,216 speeding offences in Merseyside in 2019, a 24% increase since 2018. Speed cameras captured 69,419 of these (48% up on 2018).Speed on green cameras are also picking up many offences, but because of the volume of offenses being captured, camera’s are not switched on all of the time.Fines for driving go into a central government pot, which pay for such things as Speed Awareness Courses. Paul gave illustrations of how drink and drugs offenses are increasing and that drugs can be prescription medicines. There was an increase from of 19% from 2018 to 2019. The numbers if specific drug driving offences is detailed below:- 1105 – cannabis653 – cocaine213 – both cannabis and cocaine combined.Alcohol related offences increased to 1383 in 2019 from 1278 in 2018.

Paul mentioned that there was a worrying number of tradesmen included in these statistics with professionals such as painters/roofers/tilers and scaffolders!

In Merseyside alone, there were 2149 collisions, 341 involving cyclists including 1 fatality.600 reports were made to the police about cyclists and 141 cyclists reported near misses. 24 cyclists were prosecuted and 80 received advisory letters.

To conclude, Paul talked about the Drive Safely for Longer initiative - an initiative aimed at the more mature driver. Informal assessments are carried out which aim to enhance current skills. The scheme includes a test which is not a driving test as there is no pass or fail. Instructors look at how those on the scheme deal with various traffic situations and make recommendations.

Paul can be reached at Paul Mountford, Safety Matters via email pmountford7887@gmail.com or paul.mountford@merseyside.police.uk