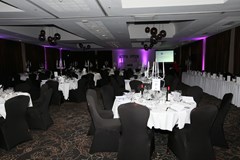 The 113th Insurance Institute of Liverpool Dinner was held at the Crown Plaza Hotel in Liverpool on the 24 January 2020.

Speeches were given before dinner.

Ms Fisher gave the response to Mrs Carly Dunningham, Vice-President of the Institute.

Ms Fisher discussed the regeneration of Liverpool and the dilemma faced by her grandson whether to wear his Wolverhampton football shirt from his Grandfather or his Dad’s Liverpool shirt! She spoke of the issues facing insurance and the perception held by others, with the problems caused by the lack of trust held by many following Pension and PPI scandals.She continued by talking about how the 9 values proposed by the CII aim to redress this lack of trust, saying she felt continuously optimistic that employees were now empowered to do their job properly in these days of automation. She was very hopeful that skilled, trained and knowledgeable employees backed by their technical expertise, were providing a change for the better and that this power of change was for the social good.

Emma thanked the 2019/20 Institute sponsors for their generous support during their year, Griffiths and Armour, RSA, Sedgwick, Pavis Financial Management and QM Costs.

Emma thanked every Council member individually for helping her year of Presidency be so successful. She gave special thanks to her mum who had recently passed. Emma said that she was in a privileged position to be able to raise money for the Clatterbridge appeal and was inspired by her wonderful mum and the impact of living with cancer. Emma thanked the sponsors; The Lord Mayor of Liverpool Cllr Anna Rothery, Chubb, Zurich, Markel, Allianz, Crowne Plaza and Champions Speakers who donated the prizes for the raffle which helped raise £2,377 for the Charity.

Emma thanked the council, a coming together of willing volunteers who were just as pivotal now as they were 1907, when the Insurance Institute of Liverpool was formed. Emma outlined some of the up and coming events for 2020; a visit to Cammel Lairds, the IIL Games and a Careers event. She highlighted that In Touch was always looking for interesting articles that institute members would find a good read and if any of the dinner guests had such an article to let us know.

Emma named the nominees for the young achiever of the year award. The nominations were of a very high standard this year which made picking the winner a very difficult decision. After careful consideration the award was won by Jon Barrie of MD Insurance, who was the worthy winner. The exceptional Service Award 2020 was won by the Institutes very own Tracy Evans. Tracy is the backbone of the Institute, a part of every committee. Both John and Tracy received their award from the President.

Emma finished by thanking past presidents who had helped and inspired her.

Dr Crispin Pailin, Rector of Liverpool gave thanks before dinner and the President’s guest Ms Sherrie Hewson entertained guests with highlights and some lowlights of her acting career, saying that she must be the only person to be thrown out of a Benidorm bar because she couldn’t sing properly. Sherrie gave very descriptive anecdotes about her 20-year acting career and life experience, culminating in being part of the Loose Women series.

The evening finished with a Disco and Saxophone player.