The work of the Insurance Task Force 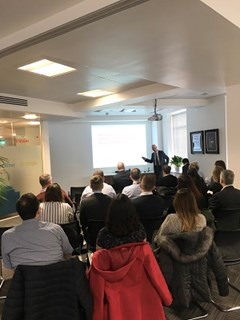 Despite concerns around Covid-19 (Coronavirus) circulating, Liverpool CII remained business as usual and were delighted to welcome David Hertzell to talk to our delegates about insurance fraud and the work of the Insurance Task Force.

As well as enjoying a highly respected law career, David is chair of the Insurance Task Force and has had an instrumental role in the work that has been done, and continues to be done, around the prevention and tackling of insurance fraud.

The story of insurance fraud

David acknowledged that insurance and fraud do have an unfortunate history together, and probably always will remain entangled with one another.

Fraud in the UK insurance industry is commonplace, and extremely so. David suggested that the cost of UK insurance fraud could be as high as £3.4bn annually, however conceded that this figure might be even higher (or lower). After all, by its very nature fraud is generally undetected.

Different types of insurance fraud have been around for centuries, including claiming for fictional items, manipulating insurance applications, or more serious, organised schemes where teams of ‘professional’ fraudsters conduct fraudulent activity on an on-going basis (ghost brokers and ‘crash for cash’ being examples of such highly organised activity).

Who are ‘the fraudsters’?

David has found that fraudsters are not of a uniform or simple profile and they are extremely difficult to detect. For example, some cases of fraud may have been perpetrated by a person who is otherwise a law-abiding person, with no criminal links whatsoever. David remarked that such persons may commit fraud on a ‘spur of the moment’ instinct or, more innocently, by complete accident.

Such fraudsters may not consider ripping off a neighbour, or a local retailer, but may be quite comfortable ripping off a faceless, digital insurance company positioned behind a computer screen.

David suggested that a person’s moral compass can be tested when it comes to committing fraud against an insurance company, in a way it wouldn’t usually be in their normal day to day lives.

David did say that there can sometimes be a ‘fine line’ between negotiation and dishonesty. It might be considered morally acceptable for a person to negotiate a more favourable outcome to their claim by inflating the value of an item, if the difference is only negligible. However, and ironically, if another person was to benefit from the same negligible amount by claiming for an item that never existed this would be considered fraudulent.

The lines are therefore slightly blurred, and it can be easy for fraudulent (and naïve) policyholders to find themselves in very serious trouble.

The outcome of insurance fraud and recommendations

The unfortunate consequence of fraud is that consumers will ultimately pay the price. David’s report suggested that it costs each person in the UK £50 per annum more in insurance premiums.

It was interesting to note, however, that the volume of fraud cases per capita in neighbouring countries was vastly lower than that of the UK. France and Germany, for example, experience far fewer fraud cases than the UK. This could suggest that it’s largely a cultural problem in the UK, but the reasons could be far more complex and diverse.

The Insurance Task Force produced a report, the culmination of a year’s efforts, to help understand and solve the problem.

There are many things that can be done to tackle the problem, including:

• Raising awareness of insurance fraud as a serious criminal activity.• Increasing regulation and creating more effective legislation.• Identifying major causes of fraud (i.e. whiplash claims) and attempt to clamp down on people who abuse the system.• Tighter controls over claims management companies and how they operate.• Better co-ordination between insurance companies and regulatory bodies.

The full and interim reports can be found at the following site, for those wishing to read further

The hope is that, among many other benefits, efforts to tackle this criminal activity will help reduce insurance costs for consumers.