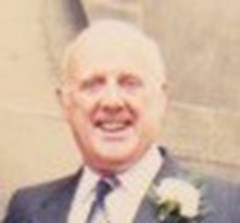 It is with great sadness that we learned recently that one of our past-Presidents, Derek Armstrong, passed away recently. Derek was our President in 1980/81, whilst manager of the local Phoenix Insurance Company branch. He also used to help organise and invigilate the CII's annual examinations until 2003.

Derek began his early career working for Friends Provident & Century Insurance Company in Newcastle upon Tyne, having completed two years National Service. In the mid 1950’s he was transferred to the Hull office as an Inspector. Whilst living in Hull, he became a father to a son & daughter. He was then transferred to the West End office in London & then onto Exeter as a Manager, onto Middlesbrough & then finally back to Newcastle upon Tyne as an Area Manager in the early 1970’s.

During his career, his employer changed several times from Friends Provident, to Phoenix to Sun Alliance & finally to Royal Sun Alliance – all without Derek actually having to leave any role – this was in the time of companies buying out each other.

During his time in Hull & London, he also studied for & passed him exams for the ACII & FCII and in later years, once back in Newcastle upon Tyne, he became an examinations invigilator. He was also an active member of the local CII branch.

Having retired from full time employment with Sun Alliance, he enjoyed a part time role working for Beaver Insurance Agency as a broker for several years.

Outside of the work place, Derek was a keen cricket fan & enjoyed watching his local club matches. He also became a cricket umpire & was respected for his decisions on play both & off the pitch.

He is survived by his wife , Margaret, of 63 years & two children & four grandchildren