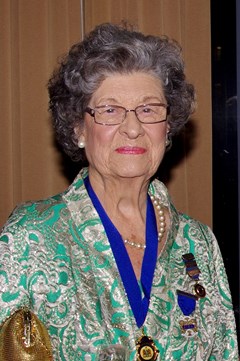 It is with great sadness that we share the news that Audrey Gough passed away on Saturday 6th June 2020.

Audrey is a past President of the Insurance Institute of Newcastle upon Tyne, and was our first woman President.

Leaving school at 16, Audrey began her career with the Ocean Accident and Guarantee Corporation Ltd (now part of Aviva), in Newcastle in 1944. In 1960 she was appointed Assistant Manager with the Hunting Group and was promoted to Manager in 1962.

In 1966 she launched Hampton Insurance Brokers which she successfully ran for 25 years before selling the firm to a subsidiary of Newcastle Building Society and serving for a short time as a Non-Executive Director.

Audrey served on the local institute council from 1965 until 2013. In 1996, our Centenary Year, Audrey was again elected as our President. Following this in 1997 Audrey was elected Honorary Vice President for Life. She was appointed to the national council of BIBA in 1978, serving until 1984, and again in 1990, serving until 1993.

Audrey also served on the National Council, The Management Committee and The Disciplinary Committee of the Chartered Insurance Institute.

Widely recognised as a champion of the insurance industry and a force of nature she was admitted to the Worshipful Company of Insurers in 1983, becoming a Liveryman and Freeman of the City of London. She was further recognised in 1998 receiving the CII's Exceptional Service Award. Our Diploma in Insurance exam prize is named in her honour.

David Robson, current President of the Insurance Institute of Newcastle upon Tyne, comments “Audrey was one of a kind, an astute businesswoman who loved the North East and served both the insurance industry and her local community through her work with the Rotary Club of Tynemouth. Her contribution and commitment to our institute, together with her drive and passion, was something we will all remember her for.”