Dive In: The Power of Inclusion – An Interview with Kelly Smith MBE, 26th September 2019, Novotel, Ipswich 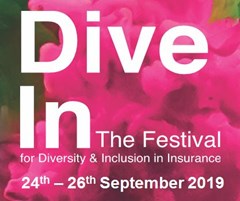 At the end of September, the 5th Dive In Festival took place globally. Reaching over 60 cities across the world, the Dive In mission is to enable people to achieve their potential by raising awareness of the business case and promoting positive action for diversity in all its forms.

Hundreds of events took place across the three days of the festival. This years’ theme focused on ‘Inclusion Impact’, and I managed to attend three events.

The first was a discussion with Mary Portas held at Aviva in London, where she spoke about finding courage and her experiences (good and bad) with the Alpha culture. She noted that it’s courage, not bravery that is needed – bravery is routed in the physical.

The second was a fireside chat, streamed live from Marsh (a blessing given the heavy rain that morning!) with Gian Power interviewing Reggie Yates and Dame Esther Rantzen. A really interesting discussion covering Dame Esther’s reasons for founding Childline and The Silver Line and the platform Reggie has for telling other people’s stories. They touched on the importance of confidentiality and providing a safe space, and the power of authenticity – being yourself in every situation.

I am delighted to say that the third event was held here in Ipswich where your very own Institute along with Willis Towers Watson hosted Kelly Smith! The turn-out was fantastic so thank you to everyone who came and supported us.

It was only right that Sally Bramall (the Institute’s Diversity Officer and a member of Inclusion@Lloyds) introduced the inaugural Ipswich session, setting the scene for Kelly to give us an insight into the difficulties she’s faced over the years with getting involved with women’s football. She overcame these to become – as described by Ian Wright – a trailblazer, setting her place in footballing history as the 4th highest England goal-scorer ever.

Growing up, Kelly was always playing football. Alongside her brother, an able footballer through his younger years, she spent some time playing on a local boy’s team until she faced a surprising problem – the parents of the opposition teams, who didn’t like that their sons were losing to a team with a girl in, despite the inclusion and camaraderie from her fellow players and coaches. As an indication of the talent Kelly was showing early on, her sibling was known locally as “Kelly’s brother”!

There were no local girl’s teams, so Kelly’s number one supporter (her dad) drove her long distances to allow her to play the sport she loved and was so good at. It wasn’t long before she was spotted by a US college scout, and through as scholarship, moved to the US to play football.

Unfortunately, Kelly was plagued by a succession of serious, potentially career-threatening injuries leaving her unable to train. Being so far from home, she felt isolated and disheartened. This resulted in depression and alcohol abuse. Eventually things improved, the injuries stopped coming and Kelly moved back to the UK and began playing football at a national level. At the time there was no youth set-up, so the ladies were pushed straight into the senior teams rather than the structured, age-defined levels you see now. The kit was all over-sized, because they were cast offs from the men’s games. Adidas turned down a boot sponsorship request from Kelly – I bet they regret that now!

117 appearances and 46 goals for England, as well as being part of the 2012 Team GB, shows just how strong Kelly was to overcome all those struggles to pursue the career and sport she loved from a young age.

Kelly touched on how gender equality in the football industry is improving but still has a long way to go. Money aside, there is visible crossover on the commentary and broadcasting side of things, with significant opportunities for women such as Jacqui Oakley and Alex Scott. Kit is fitted and sponsored, and the women are surrounded by teams of experts looking after their well-being. She mentioned how you need to build your own support network; surround yourself with friends and family so you have someone to turn to when you’re struggling.

I found her determination to not let the lack of women’s football teams, multiple injuries and depression get in the way of her dreams, totally inspiring. She was courageous enough to share her issues with alcohol abuse and to also reveal that playing football in front of 75,000 wasn’t a problem but talking to us for an hour made her nervous!

Visit Dive In Festival to see more on the events that took place this year, and for news on next years Festival.