A Day in the Life of... Phil Rawlings 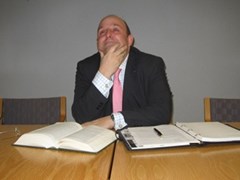 Phil is a Council stalwart, a Past President and the current Charities officer. He is always ready to pitch in and help out. In his own words…..

In May 2017, I took an opportunity which took me away from the AXA Group after 37 years of service. For nearly 8 years I had been the Motor Claims Manager for AXA Corporate Solutions. Before that, within AXA Insurance and Guardian Insurance, I worked in various claims related roles including management of large losses and the setting of the strategy and technical methods of settling motor claims.

My insurance career started in July 1980 in Nottingham, straight from 6th form. Guardian Royal Exchange had a small claims office and I was taken on and was soon managing claims of all classes. After 6 years I was asked to join the Head Office Claims Team in Ipswich. I made the journey from Nottingham to Ipswich, arriving with a perm - it was the 1980s after all! Interestingly the journey takes longer now than it did 30 years ago.

The learning curve was steep but I was surrounded by experienced and knowledgeable colleagues who helped my development. The role involved the management of larger claims, in conjunction with colleagues at branch offices, by passing on experience as it had been passed onto me.

5 years later I was asked if I would like to move to Southampton where my experience might be helpful in developing a young and inexperienced team. In 1991 I arrived in Southampton as Claims Superintendent – a title hardly ever seen anymore and makes me feel like a dinosaur! I must have been doing something right as I was then asked to take up a role in London working closely with the Managing Director and his Executive Team. This entailed managing complaints and other projects being driven by the top team. This was succeeded by a move back to Ipswich to take up the first of many claims related roles, this time in process re-engineering - making sure claims were being managed efficiently and effectively.

By far the most stressful role was managing the Executive Complaints Team during the restructuring of GRE, AXA and Provincial. Different approaches, new colleagues and operational hurdles all combined to make every day a new day. I did however forge relationships which remained strong long after I left.

Equally pleasing was then having responsibility for establishing a set of common standards by which motor claims were managed across the new organisation. This included the sign off of technical training and the production of manuals and circulars to guide staff. This was particularly important when some operations were off-shored to AXA in India.

More recently my role as Motor Claims Manager was to manage a team of claims handlers dealing with claims from some of the biggest fleets in the UK and some of the most well -known organisations. Meeting with clients on a regular basis was the highlight, where it was important to inform them of the progress we had made in settling cases of significance and the developments in the claims marketplace.

For the last couple of years I have taken my working life much more steadily. I work in an audit and consultancy capacity for organisations that would like the benefit of my experience and short term availability. That has given me time to do things I did not have time for whilst working full time. Playing the occasional round of golf, watching cricket (my body gave up on me actually playing) and reading books (not files, reports or evidence). When I’m not soaking up the sun in Lanzarote, I’m watching my beloved Nottingham Panthers Ice Hockey team and despairing of the fortunes of Nottingham Forest. Please note its Nottingham Forest – it is never shortened!

I have served on the local CII Council since 2008, was honoured to be President in 2010/11 and more recently taken up the role of a Welfare Visitor for the Insurance Charities. I would urge you to support the Insurance Charities where you can. If anyone would like to know more about their work, I would be happy to visit you and explain what they do and how easy it is to help.

I have visited a small number of people during my tenure and so far the charity has been able to help each one of them when they needed its support the most.

I would also encourage everyone without a formal insurance qualification to consider study. Not only do qualifications promote increased knowledge but also demonstrate professionalism to others. Professionalism and confidence are vastly important to employers and customers and the CII provides study platforms for everyone to achieve a formal qualification.

So who is Phil Rawlings? Last week someone referred to me as a legend. He was however drunk and as such I don’t think that counts!